A New Era of Perfection

The revolutionary new FBV® (Flat Bottom V®) patented skate sharpening system from Blackstone® gives you competitive advantages like you’ve never experienced before. Superior endurance. Greater power. Enhanced agility. Better control. These are just a few of the improvements skaters from recreational leagues to the pros are reporting with this new blade sharpening technique. In fact, research conducted by The International Ice Hockey Research Academy at the University of Ottawa, under the direction of Dr. T. Blaine Hoshizaki, supports the benefits players are noticing: “The results in this study definitely confirm that the Blackstone® innovation is easily perceived and recognized by the subjects as having a performance benefit.”

What People Are Saying About FBV®


“For pushing and gliding and being on top of the ice, there’s a huge difference. Because it’s not sinking into the ice, you don’t have to work as hard. It’s absolutely incredible.”
Cory Stillman, Florida Panthers

“Guys like it and they feel less fatigue in the legs”
Bert Godin, Equipment Manager, St. Louis Blues

blade. The depth of this hollow determines the performance of the skate and is a matter of individual preference.

Simply put, the deeper the hollow, the more blade digs into the ice. This creates “bite” but the trade off is that it decreases the ease of your glide. So you basically have to choose between gliding speed and grip.

FBV®: The Best of Both Worlds

FBV® eliminates the need to choose one benefit over the other, with a breakthrough architecture designed for the perfect blend of speed and agility. The flat bottom shape of the blade allows the skate to glide across the top of the ice rather than cut through it. This reduces drag and helps increase speed. At the same time, the precision edges are ready to dig in and provide precise control

on turns and stops.

The result is a revolutionary, no-compromise blade sharpening technique that allows you to skate faster with less effort and experience precise control on turns and stops, so you get maximum bite and maximum glide all the time. The secret: the Blackstone® SPINNER SYSTEM: a breakthrough new coated disc system that dresses the radius and shape of the grinding wheel so that it can create sharpening on the bottom of the blade. The FBV® system does not alter rocker radius or remove any more steel than conventional sharpening.

Another advantage of the FBV® system is that you can “fine tune” the combination of speed and agility that’s right for you. Initial testing and feedback tells us that 90/75 is relative to the edge of a

However the skating sensation is so superior to what you’re used to, you have to experience it on the ice to know which one is best for you. Simply by noting the setting of your sharpening before you take to the ice, you’ll know which aspect to dial up or down to get the balance that best suits your skating style and personal preferences.

Most skaters feel that 90/75 is a good starting point and from there you can work with your pro shop to decide if you prefer the edges to be more or less sharp.

Skate sharpening is a process which, we suspect, started in the 1800s with a manually powered

grinding wheel similar to that depicted in this picture from 1877. You can see the beginning of a radius being ground into the blade by the arc of the grinding wheel.

As time went on, the sharpening process fell into the domain of shoemakers, blacksmiths and knife sharpeners who began to use motorized vertical grinding wheels to sharpen skate blades. Discoveries about the process were made over time…one of which was that the smaller the vertical grinding wheel’s diameter (producing a larger ROH – radius of hollow), the sharper the edges of the blade became. This led to the realization that a deeper hollow (smaller radius) gave the skater greater mobility (bite) and that a shallower hollow (larger radius) increased speed (glide).

After years of using a vertical wheel it was discovered that a radius could be scribed in the face of the grinding wheel by placing the wheel horizontally and then rotating a single point diamond dresser across the front of the wheel. This innovation not only provided many variations of the radius, but also a radius on the face of the wheel that could be produced and reproduced easily by any operator.

The latest innovation in the process of sharpening skates is the patented ‘Spinner System’. This system uses the horizontal grinding wheel, but dresses the wheel with a ‘spinner’ instead of a single point diamond. A spinner is a disc with a radius machined on its exterior and which is then coated with diamonds. The diamond coated dressing wheel spins and, as it bumps against the face of the grinding wheel, dresses the grinding wheel with a precise radius. The spinner dressing system produces a more accurate dressing result with less effort than was previously required with a single point diamond.

The innovation of the Blackstone patented ‘Spinner System’ is that the operator has the opportunity to put any radius and, most notably, any ‘shape’ on the blade.

It is important to know what hollow you are skating on because it affects your skating technique and how your blade reacts with the ice. Also, knowing your radius/hollow will allow you to get the same sharpening you normally receive even if you travel to a different pro shop.


The patented spinner system changes the way skates have been sharpened for hundreds of years.  The spinner system uses a small 1” disc precision machined with an ROH or an FBV shape.  These custom discs are diamond coated to dress the grinding stone with the specific shape.

The Spinner System is available in two versions.   **Changing spinners in either version is easy and there are no tools required.  Simply unscrew the drag cap and replace, ready to dress the stone with the desired shape immediately.** 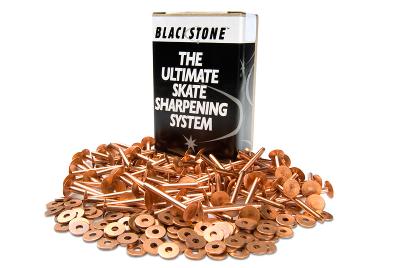